Paris Was a Woman

“Paris Was a Woman” has been reissued by Counterpoint Press. 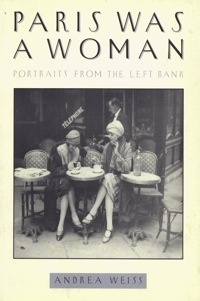 “The lives and work of these women have been covered in other books, but Weiss’ effort stands head and shoulders above most of these… Witty, accessible, inspired, this is a thoroughly enjoyable book that you will keep coming back to.”   — Gay Times, London

“Andrea Weiss has told the fascinating, less well known story of the remarkable women artists and writers who made pre-war Paris the cultural capital of the world — riveting!”
— Edmund White

“Paris Was a Woman is a classic Modernist cultural biography of the places and people who made Paris the center of the avant-garde universe in the 1920s. People are still to be seen clutching their (our) old copies outside the addresses where Gertrude and Alice and Djuna and Natalie, their lovers and their characters, changed and charged the atmosphere with sex and sexual politics, love, heartbreak and radical creativity. The book has always graced my classroom. Now a new generation will enjoy the source text of the Modernist feminine/feminist.”  — Jane Marcus, author of Virginia Woolf and the Languages of Patriarchy; Art and Anger: Reading Like a Woman; Hearts of Darkness: White Women Write Race

“[In] Andrea Weiss’s enjoyable book . . . the bohemian world of Paris during the 1920s is
more interestingly and accurately conceived as a community of women . . . She draws on
a wealth of research [and] has a professional eye for what a photographic portrait is.”
— The Times Literary Supplement

“The strength of this book lies in its upbeat exploration of the pairings, connections, and
enabling gestures that briefly made Paris not a mistress but a gifted woman.”
— Signs: Journal of Women in Culture and Society

Profusely illustrated and painstakingly researched, this book is an enlightening account of women who between wars found their self and their voice in Paris. Though mostly concerned with the stories of lesbian or bisexual women such as Colette, Gertrude Stein, Alice Toklas, Sylvia Beach, Djuna Barnes and Natalie Barney who came to the City of Light attracted by an aura of unbridled freedom, this book will appeal to all those who are interested in this fascinating early period of the twentieth century as well.

Paris Was a Woman:

Paris Was a Woman is an illustrated collective portrait of the unique community of women who became known as the ‘women of the Left Bank’.  Authors Colette, Djuna Barnes and Gertrude Stein, poets H.D. and Natalie Clifford Barney, painters Romaine Brooks and Marie Laurencin, editors Bryher, Alice Toklas, Margaret Anderson and Jane Heap, photographers Berenice Abbott and Gisele Freund, booksellers Sylvia Beach and Adrienne Monnier, and journalist Janet Flanner all figured in this legendary milieu. A wealth of photographs, paintings, drawings, and literary fragments, many previously unpublished, combine with Andrea Weiss’s lively and revealing text to give an unparalleled insight into this extraordinary network of women for whom Paris was neither mistress nor muse, but a different kind of woman.