Andrea co-founded Jezebel Productions with Greta Schiller in 1984 as a nonprofit film company devoted to making inspiring and entertaining films about real people. Here are just a few of the films Andrea directed. For more information about Jezebel Productions, our history, purpose, board of directors, new projects, complete list of titles and ordering information, visit the Jezebel Productions site, www.jezebel.org.

BONES OF CONTENTION by Andrea Weiss

“Bones of Contention” is the first nonfiction feature film to explore the theme of historical memory in Spain, focusing on the repression of lesbians and gays under Franquismo. Lining the roads of Spain, masked by miles and miles of pine trees, are unmarked graves in which over a hundred twenty thousand victims of the Franco regime are buried. Today the families of the desaparecidos lead a grassroots effort to uncover and identify the bones of their loved ones, despite opposition from the Spanish government. Invisible to the eye but hyper-visible in the mind, these mass graves of Spain’s missing persons are an apt metaphor for the historical memory conundrum: How does a country excavate a past that is actively suppressed?

The film weaves together two strands, the historical memory movement’s campaign to uncover the past, and the search for the hidden lives of lesbians and gays under Franco. These strands are connected through the figure of Spain’s most famous poet, Federico García Lorca, who was killed by a right-wing firing squad in the first few weeks of the Spanish Civil War. The mystery of his missing remains and the debates over their significance provide the narrative spine of the documentary, as he has become the symbol today for both the historical memory movement and the LGBT movement. Funded in part by: New York State Council on the Arts artist fellowship, Puffin Foundation, and a U.S./Spain Fulbright Award Fellowship.

Read more about this project on NBCNew.com.

Escape to Life: The Erika and Klaus Mann Story

Escape to Life, the result of a remarkable pairing between fiction and non-fiction filmmakers, depicts an even more remarkable relationship. Erika and Klaus Mann, the brilliant eldest children of German author Thomas Mann, claimed to be identical twins, despite being born more than a year apart and of different genders. Living under the shadow of Hitler’s rise, Erika and Klaus were intellectuals, homosexuals, and pacifists who lived as exiles. Erika was an actress whose satirical revues were censored throughout Europe. Klaus was a self-doubting writer whose banned novel, Mephisto, didn’t become a bestseller until long after his suicide. Filled with contradictions, their fascinating lives stand as a testament to the power of the individual — and art — against the forces of history. Weiss and Speck weave a seamless blend of dramatic scenes, compelling interviews, and amazing archival footage.

A video collage of song and remembrance. The story is based on Judith Magyar Isaacson’s highly acclaimed memoir recounting her real-life story as a young Hungarian girl growing up during the tumutluous years of WWII and the Holocaust. The film follows Judith’s present day journey back to the places of her past, reflecting an interior journey to recover memories she had long repressed as a means of survival.

Based on the electronic chamber opera by Mark Polishook the libretto was drawn from the memoirs of Judith Magyar Isaacson. The film’s soundtrack is a contemporary electronic opera for one voice, featuring acclaimed vocalist Angelina Reaux. Staged scenes from the opera, together with rare archive footage and private family photos, combine to create a haunting tale of a young woman’s coming of age. 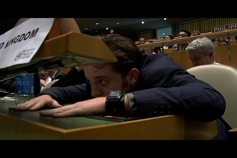 2008, 56 mins
Directed and Edited by Andrea Weiss
with the collaboration of my amazing graduate students in film/video at the City College of New York (as follows):

U.N. Fever follows three teams of college students as they prepare to compete in the international Model U.N. competition held annually in New York City.  These passionate young people are among our future world leaders.  They seek real-life solutions to today’s global crises.  The film peers into their lives as they undergo the dramas, breakdowns and triumphs of this challenging, life-altering experience.  This is a real-life story leaving audiences feeling hopeful about the next generation and its commitment to world peace, human rights and justice.