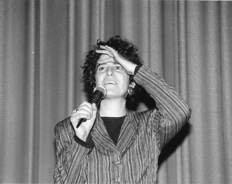 Guest Lecturer, Erika and Klaus Mann: Traitors to the Fatherland at Leopold-Maximilian-University of Munich, January 27, 2016.

Screening/Book Signing for Paris Was A Woman, as part of the International Women’s Film Festival of Barcelona, February 2, 2016.

Guest Lecturer, Erika and Klaus Mann: Traitors to the Fatherland at University of Vienna/US Embassy Vienna, May 11, and University of Graz, May 12, 2015.

Panelist at the conference, CODES and MODES: The Character of Documentary Culture. I spoke on a panel on Documentary Ethics on Saturday, November 8, 2014. Hunter College, New York City.

“The Writer and Her Muse: Gertrude Stein and Alice B. Toklas,” Rifkind Center for the Humanities at City College (NAC 5/225) on Thursday, March 20, 2014. (In conjunction with re-publication of Paris Was a Woman)

“The Writer and Her Muse: Gertrude Stein and Alice B. Toklas,” CCNY Div. of Interdisciplinary Studies at the Center for Worker Education, 25 Broadway 7th floor, on March 25, 2014. (In conjunction with re-publication of Paris Was a Woman)

Talk/Screening of Before Stonewall at University of Arizona at Tucson, February 28, 2013.

Erika and Klaus Mann: Traitors to the Fatherland — talk with film clips at German Studies Program, University of Arizona at Tucson, February 27, 2013, and at the Division of Interdisciplinary Studies, CCNY, Nov. 28, 2012, as part of the Patai Lecture Series on Women, War and Peace.

In the Shadow of the Magic Mountain —  Book/film presentation on June 10, 2009 at the Goethe-Institute New York.

Mini-retrospective in Vienna — Before Stonewall, International Sweethearts of Rhythm, and Tiny & Ruby at the Identities 2009 Festival in Vienna Austria, June 5-7, 2009.

Paris Was a Woman in Trieste — Special retrospective screening with invited filmmakers Andrea Weiss and Greta Schiller in Trieste, Italy, January 20, 2009 as part of the Trieste Int’l Film Festival.

Communism, Perversion, and Other Crimes against the State: The FBI Files of Klaus and Erika Mann —  Presentation as part of the panel “The FBI Files on Modernism” at the Modern Language Association convention, San Francisco, December 2008.

International Sweethearts of Rhythm screened at The Film Society of Lincoln Center, NYC, on the twentieth anniversary of its premiere at Lincoln Center in the New York Film Festival.